We ate breakfast in our hotel, as it was included. It was a big buffet that was pretty good, though apparently the coffee from the machine was shit.

But the weather was absolutely miserable when we woke up, raining pretty heavily. So we hung out in the room for a while.

After a couple hours, it slowed to a mist, and we decided to head out. The ceiling was really low, in part because we were so high (1,400m above sea level) but we couldn’t see the mountains or anything else when we could see the night before.

We headed to “Black Lake” and hoped the rain would stop. It did very quickly. In the autum, most of the lakes are lower than they are in the spring: 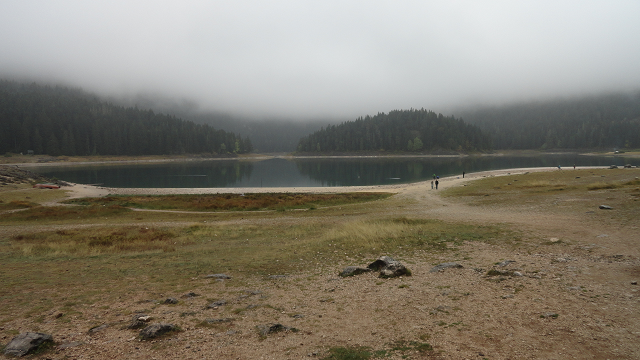 But, at least the low ceiling gave us a pretty great reflection: 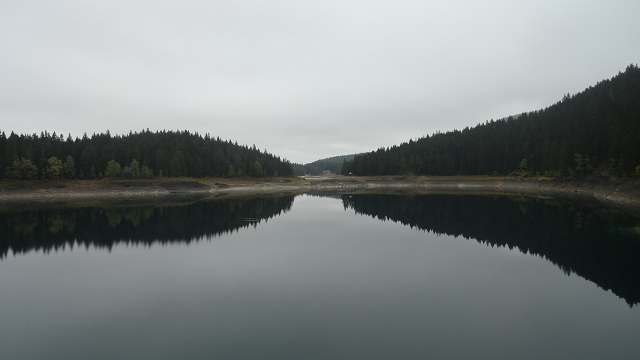 We walked around the whole lake (two at this time of year) – it’s one of those weird lakes that drains two ways, which has always fascinated me. The trail was really easy initially, with a hilarious number of benches, but it gets quite difficult for a relatively flat trail, at the far end. I told Jenn that she prevented me from climbing to the peak (the second highest in Montenegro, by only 3 metres), so that’s probably for the best, especially given he weather.

I tried to go to Tito’s Cave, but I didn’t have the right footwear, as it was way uphill.

As we were walking back to town, the clouds parted and the sun came out. That let me take some more pictures: 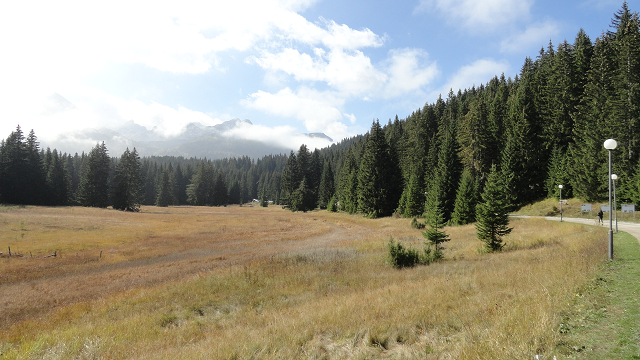 And, looking around, we noticed a T Bar in back of the hotel: 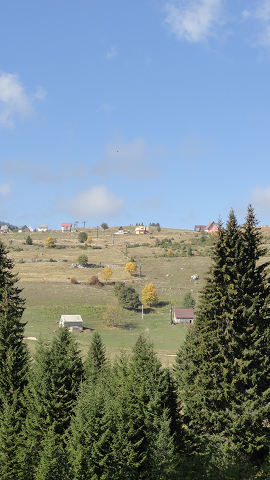 Yup, just in between people’s houses and farms. Apparently that’s how it works up here, there are lifts and I guess you just ski down, like you’re in the Alps. There are four or five lifts in the area, but this was the only one we saw.

In town we grabbed some bureks and donuts for lunch.

The hotel receptionist had given us a list of things to do, since we were there off-season and couldn’t go whitewater rafting or swimming (it was pretty cold). But she didn’t really tell us which things we should do. I latched on to one of the things she suggested, Curevac (pronounced Churevats), a look out point at the Tara Canyon, the deepest canyon in all of Europe and a full 1,300 metres deep around Curevac. 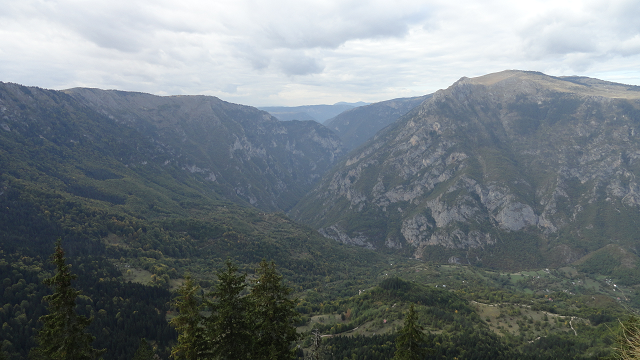 The picture does not do it justice. Those white dots are houses.

We walked along it for a while, but the trail was pretty rough and there was nothing between us and the edge so eventually we left.

That night, we went to a more traditional Montenegrin restaraunt and the I had the “classic” menu with some really good lamb, the kind of cut that would have never been served in a restaurant in Canada 20 years ago but now would be served as some kind of special cut, for lots of money. The food was reasonably priced as usual.

That night, we used the hotel’s sauna and “Turkish Bath” (really just a room with cold water) for a few minutes and got super relaxed; it was nice.