The night before, I saw what appeared to be an excellent deal for breakfast. So we went to a hotel for a cheap buffet and that turned out to be a mistake. (Well, we were maybe too late.) The hot food was cold. Everything was not really as good as we had at other hotel buffets. We did get omelets though, so that’s something. Anyway, it was dirt cheap (CAD$7.50 per person) and we learned a lesson.

We decided that, since we were in Kotor for only two nights, we had to climb the Kotor fortress, even if it is 1,300 or so steps up to the top. We’re only going to be here once. The city walls extend way up the side of the mountain and they are longer than Dubrovnik’s, even if they’re way less high and falling apart.

The good news about the climb to the top is that the steps are separated by lots of reasonably flat parts (and ramps) and, unlike Guatape in Colombia, which has half as many steps, there are numerous places to stop and look at the view, out-of-the-way the others going up and down. 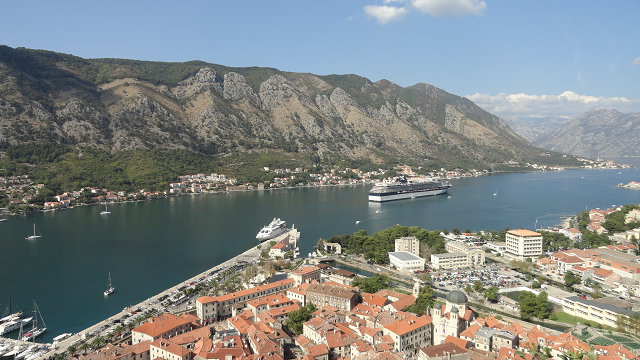 The higher you go, the better the view gets, as you might imagine. 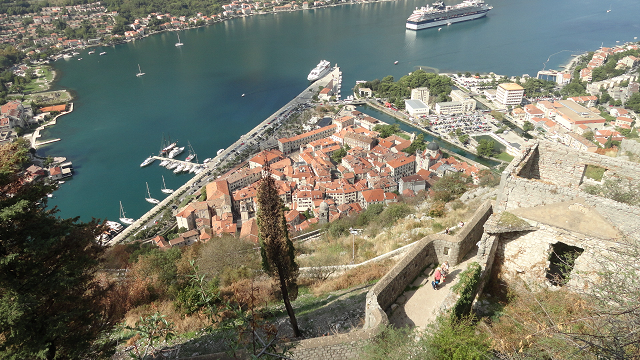 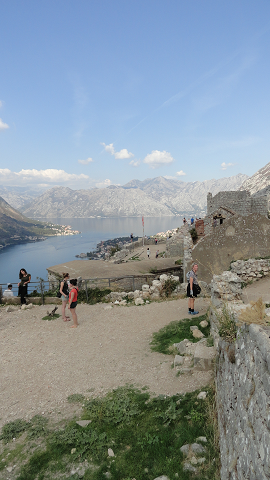 I have lots more pictures, some of which include crazy people taking crazy pictures of themselves on the edges of walls very, very high above the city. Also, I walked through a meadow behind the fortress, where an old village with a church used to be.

When we got down, we went swimming in the Adriatic, in October. The beach was pebbles but it was still very nice to go swimming after sweating our asses off on that climb. Also, the sun was out.

We went back to the city and got some gelato. Then we went for lunch. Backwards, I know. (There might have been a brief break in there. I can’t remember.) The lunch was massive and was one of these “traditional Montenegrin menus” that are over the place.

We walked to the south gate, where we entered, to look at its more elaborate edifice. It wasn’t great but it was something to do that didn’t involve climbing a mountain.

Jenn then went shoe shopping and then we had an abortive “wine tasting” experience when we were roped in to paying for an extraordinarily cheap “tasting” which was literally a taste of one wine. Not what we thought. We liked the wine enough I bought a bottle for my father. (Days later, I saw the next year available for less than half the price.)

Our lunch was so big we didn’t eat dinner. We ate some dessert at the “best dessert shop in Montenegro” which was pretty good and at least different from what we were used to.

Then we went out for drinks at a bar. And that was that.