We finished off our watermelon first thing, and then got in the car and I drove as quickly as I could through the narrow street to get down to the downtown. There we picked up breakfast for the road.

It was raining rather hard, the first time it had rained hard on the trip when we actually had plans to do something.

Our plan was to visit the old city of Bar, but when we got there the rain had picked up even more. Worse, there was a nasty wind. We sat in the car in the parking lot, eating our breakfast, and decided there was no way we were going out in this. 15-20 minutes later, on our way out-of-town, the rain pretty much stopped. Ah well, what are you going to do?

We had liked the view of Skadar Lake on the way down, so we decided to take pictures on the way back. The weather didn’t quite cooperate. 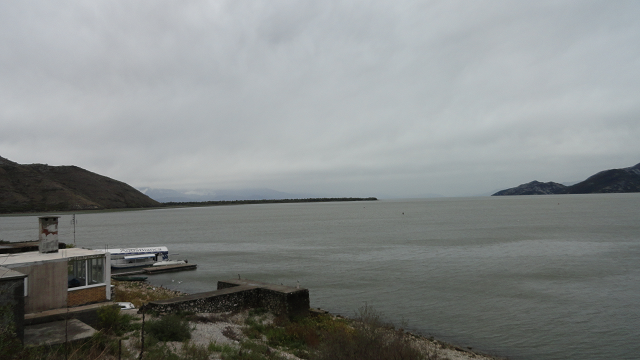 Because we didn’t go to Bar, and we didn’t think we had time to go to the mausoleum, we got to Podgorica way earlier than we planned. So we went to our hotel and fortunately were able to check in super early. Then, we went to the train station and bought our tickets for Belgrade. And then we began the bizarre process of attempting to return the car.

The Enterprise guy had told us which building to drop off the car at. Unfortunately, he had just pointed it out. He told us to park in front.

Well, we couldn’t park in front, because there were no spots. A Montenegrin would have just parked on the sidewalk, as that’s what they do there. But we drove to the church parking lot where we picked it up days earlier. Then, we tried to find the office.

While I wandered around, looking for other signs, Jenn tried calling, emailing and texting the numbers and email address on the rental car contract. She eventually got a response to a text. The response was that we would be called shortly. Eventually, she received a call, and the guy from the other day told her he was at the airport and he’d be there at 1:30. We were dubious.

At 1:30 he showed up in the parking lot and we delivered the car. We once again never saw an Enterprise office and were left with the distinct impression that there was no office. We suspect it was maybe a desk in the broker’s office. Enterprise states that there is an office with specific opening hours. I don’t believe that’s the case.

We walked from the church to the heart of the city, ending up at the clock tower. We had kebab for lunch and then we wandered into the old town. The old town is not that impressive, and we basically just got lost a little, and looked at a Mosque. We were followed around by one of the city’s wild dogs.

Then we wandered to the “new” city (not as new as the area we dropped the car off in) so Jenn could shop. It was here, in a bar trying to do decide what to do next, that we decided that Podgorica really is one of the most boring cities in Europe. Its reputation precedes it.

After our drink, we went to the Mall of Montenegro. We were once again followed by a wild dog. We figure we must smell different from locals.

Then we headed back to our vaguely smokey hotel before dinner. 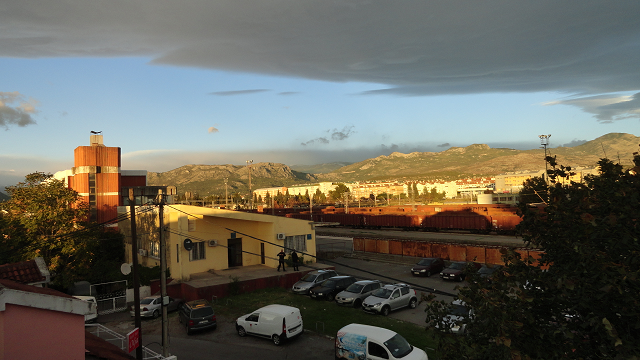 We stayed here for the proximity to the train station, not for the ambience.

For dinner, we went to the most popular (and some say best) restaurant in Podgorica. It was the most raucous restaurant we ate in on the entire trip. It was a really unique experience and felt like maybe we had entered a different part of Montenegrin society than we had seen previously. We had a lot of food and we both enjoyed it very much. I had some crazy log of meat, stuff with cheese and cover with cream sauce. However, Jenn would get sick from her meal.

We returned to our vaguely smokey hotel room and watched National Treasure.