We got up early in order to make our 8:10 train. We had breakfast at the hotel and then walked over to the train station.

The train was a little late, but we think we got on around 8:25.

We had decided to take the train back when we planned to come here in the spring. It’s considered one of the world’s great train journeys. Our plan was to take it from Belgrade to Podgorica. That was a better idea.

It is a stunning train journey, but only partially. The problem with what we did is the scenic part is in Montenegro and that’s only about 1/3 or less of the trip. So, if you take the train from Montenegro, it starts out super scenic and gets less and less interesting. The total trip is around 12 hours from Podgorica (or 13 or so from Bar) and for much of that time, you’re just looking at rolling hills and that’s about it. So if you must do this train trip, only go from Belgrade to Montenegro because at least that way you’ll end with the good stuff.

By the way, during the rain in bar that prevented us from seeing the old town was apparently snow in many other places (likely including Durmitor). So our journey through the mountains of Montenegro saw not just snow-capped mountains, but actual snow outside the train.

12 hours on a train sounds like an okay thing when you’re sitting at home planning your trip but it sucks to do it (especially when you have food poisoning). I hadn’t been on anything that long in a very long time, and I forgot how boring it gets.

To make matters worse (albeit more interesting), there was construction on the line. So when we got to Valjevo in Serbia, we had to board buses. There was a mad scramble to get on them (as there were not enough seats) and to get our luggage in the cargo bay. It was kind of insane. Then, 45 minutes later, we had to switch back to another train (a commuter train) to enter Belgrade. Fortunately, some very nice Serbian women helped us figure out what was going on and guided us through the whole process.

Once in Belgrade, we had what we thought was a short walk to the hotel, but it turned out to be all uphill. So, imagine, two tired people, one suffering from food poisinging, dragging luggage up a hill in a busy city. Sounds like fun.

Our hotel was super swanky, though, which was much appreciated. Not feeling in the mood for doing much of anything, we ordered room service and collapsed.

Our hotel room was the nicest we stayed in for our entire trip with one exception. The toilet: 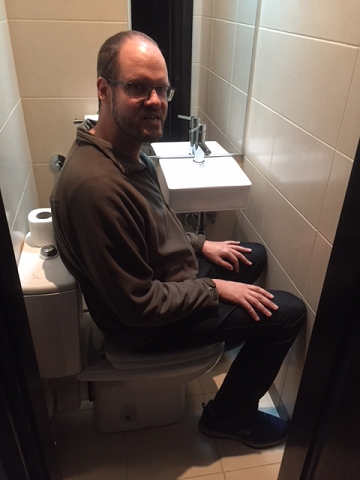 ?Is this the smallest toilet outside of an airplane? I have more leg room in an airplane toilet! Can you imagine what it’s like taking a shit on that thing? I mean, sorry for the TMI, but seriously. It’s not comfortable.

Fortunately, the rest of the hotel room was very nice.