After we woke up and admired our view once again, we realized that the only map we had was in Montenegrin and not very good. It was one of those highly stylized maps sponsored by a local business. The maps we had used in Zagreb, Dubrovnik and Kotor had all been exceptional, given their detail of seemingly every single alley in each place, something I really appreciated. So we set off to get a map from a tourist office literally on the other side of town.

First, we found a bakery and got some pastries for prices that were so low they should be illegal. Then we found a place to have caffeine. And then we walked across basically the entire town to find a tourist office, not realizing we walked by two others. The walk gave us perspective on what the rest of the place was like, outside of the tourist district (i.e. much busier). The lady at the tourist office was extremely helpful and gave us some things to do, something I was worried about, given our experience of the old town the night before.

Ulcinj is a beach town the season is over in October so nobody is in the tourist area, and many of the restaurants and other businesses are closed. Off the main beach strip and the main street down to the beach, restaurants and bars were far more likely to be closed than open. This was weird for both of us, as neither of us could recall having been to a beach town that was so shut down for the season before, especially given that the weather was warm enough for swimming.

The “big beach” was too far for a walk (well, unless we wanted to spend the entire day doing it) and I didn’t have any interest in driving, after our trek to Ostrog, and we didn’t want to take a cab, so that was off the list.

A cove, up the coast, was also likely a day trip on foot.

So we decided to go to the “Pine Woods.” So we wandered up a hill out-of-town, finding a place that looked like it must be, but wasn’t, and then we kept walking along the side of the hill till we found more pine trees. Everything along here was closed. Every bar, every club. There was a public “beach” that was open, but everything was put away. 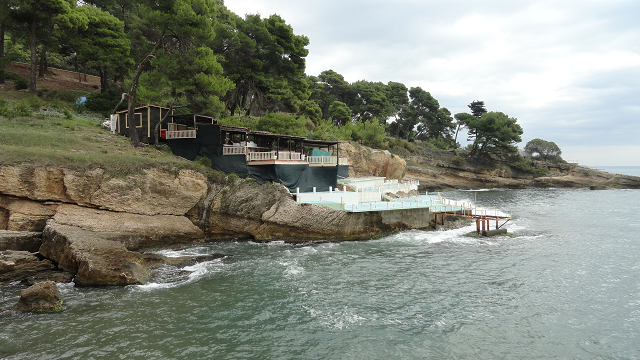 When we got back to Ulcinj, we decided we should at least experience the old city a little bit. So we went up to one of the restaurants that was actually open and had a small lunch on a terrace, high above the city. 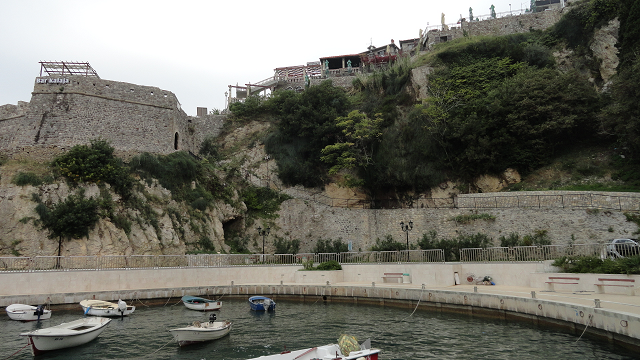 I had octopus salad, which made me happy.

After lunch, we walked through the old town, which is smaller than Kotor’s. I would say that if you want to come to Ulcinj as part of your tour of the walled towns of the Dalmatian coast, you should come here first, before seeing the more impressive ones. We headed to the castle in the old town, where we went to the museum, really three museums, for a ridiculously low entrance fee. 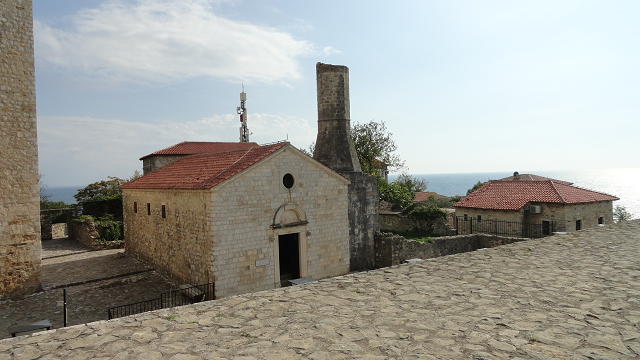 After the museum, we went back to our apartment for watermelon and beer.

For dinner, we went to a highly touted fish restaurant and I had my fourth whole fresh fish of the trip. It was delicious.

After dinner we had gelato and went home for more beer.