We had breakfast at the hotel again, as it was included, but it was in a different room, which was interesting. We never really found out why. The good news is that it was on the first floor, where we a much better view than from the basement, with no windows. 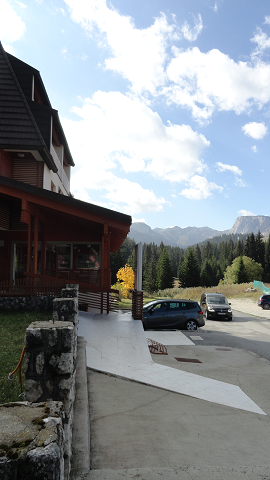 It was a beautiful morning, unlike the previous one, and I was happy about that given that I had to drive and didn’t really look forward to driving back along that road after Savnik in the rain.

The drive back up those switchbacks was busier (which was weird) but mostly better because I knew what to expect and my fears of doing it again turned out to be exaggerated. However, I had forgotten how windy the road was prior to those switchbacks and so the whole journey back to the main highway felt rather interminable, even if it was way faster and used way less gas (downhill much of the way).

There are a few iconic sites in Montenegro that the guidebooks tell you are essential. The mausoleum on the “black mountain” which we never got to is one. Durmitor is another (though it’s off the beaten path, so one assumes most people don’t get there). Kotor is another. And then there’s the monastery in the side of a cliff, at Ostrog. I had gotten it in my head that we should go to Ostrog, especially if we weren’t going to have time to get to that mausoleum. And so, given how early we got down to Niksic, we decided to head to Ostrog. This turned out to be a terrible idea.

I have done the odd crazy drive in my life.  I have driven to Labrador from Quebec, on gravel roads with constant blind switchbacks, with oncoming logging trucks who don’t expect traffic coming the other way. I have driven between Lytton and Lillooet, BC, on Highway 12, which reduces to one lane around blind switchbacks because that’s the only way the road could fit on the site of the hill. I have driven back roads in Wales and the Lake District, where buses and trucks come at you out of nowhere, even though you’re on a one lane road with a hedge on one side and a wall on the other. This trip to Ostrog has to be right up there with those trips as one of the most insane things I have ever done in a car. I thought the drive into Savnik was bad. I thought the drive to the Tara Canyon was bad. (I did, I think I forgot to mention that, though.) This was so much worse.

All those squiggly lines at the end are switchbacks, folks. On a one-lane road with no dividing line, few places to pull over and no fucking guard-rails.

I cannot convey to you the insanity of this road. A cliff going up on one side, a cliff going down the other. No guard-rails, just the odd wooden post or a 6-inch high stone wall that would do absolutely nothing to stop a car with some momentum. At one point, there’s no room on the cliff so it goes through the side of the cliff. There’s tons of traffic, as it’s a tourist spot, including tour buses which you marvel at given that it seems like they don’t fit. My biggest fear was having to back up to let someone by, with nothing but my mirrors to tell me how close I was to the edge. Fortunately, I never had to do that.

The crazy switchbacks at the end are actually less bad than the approach road, if only because there are trees on both sides of you so if you did go over the edge, you might be stopped by some large trees. (One can hope.)

This is what I have to say about Ostrog: it is not worth the stress. If you are driving on your own and you have any fear of heights at all, no matter how small, don’t do it. As I said, I have driven the odd crazy road in my time, and this is up there with the worst of them. And it is really, really fucking high up. (The road itself is mostly in great condition, as are all frequently used roads in Montenegro.)

This is all there is there: 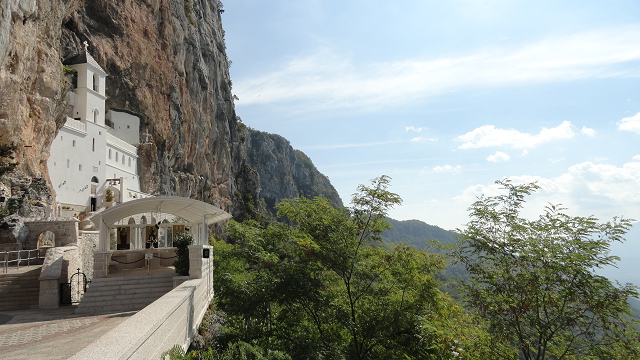 Once you’ve seen a picture, you’ve seen it. I’m not sure it’s worth the fear. And it’s not just the fear. This is a working monastery. As a heathen, I felt kind of uncomfortable intruding on these monks attempting to do their daily penance with a host of tourists (fortunately, most of them Orthodox) gawking.

If you must go, for science’s sake take a tour bus driven by one of those people who drives multiple times a week. I’d trust them over me.

When we drove back down to the lower church, we saw a sign for a “new road” heading toward Podgorica (all roads lead to Podgorica). We figured it couldn’t possibly be worse than the road from Niksic so we decided to take it instead and that was such a good decision that I was practically cheering as a I drove down a two-lane road with a line down the middle, with guardrails where necessary, and wide enough you never had to pull over or back up. So, if you do insist on driving to Ostrog, take the “new” road from Podgorica.

In order to get to Ulcinj, our next destination, we had to drive around Podgorica, which essentially means driving through it (so that takes a while). We then found a place to eat lunch somewhere between Podgorica and its airport, along the side of the highway, a four lane road at times, making it the biggest in the country. This restaurant was the first place we encountered where nobody spoke English. The food was good, even though I ordered something unfamiliar and got presented with a pork paddy the size of my head.

In order to get to Bar, a tunnel was built in 2005, apparently cutting down the travel time by 50%. Before you get to the tunnel, you cross the biggest lake in the Balkans:

Albeit, at the narrow end.

The approach to the tunnel is the only place in the entire country where we saw a speed limit for 100 kmph. It lasted for maybe half a kilometre, which was pretty funny. This is just a testament to how windy the roads are, as well as how little there is in the way of controlled access highways (essentially just this tunnel).

Bar appeared pretty resort-focused to us, though not as bad as Budva. It felt like a fairly long drive from Bar to Ulcinj, if only because there’s one road and it travels through every coastal town. Montenegro is so small that we filled up our tank here for the one and only time we had to in a four-day car rental that involved driving essentially the entire length of the country one and a half times.

Ulcinj (pronounced Ultsiny, with the y as a consonant) is next to the Albanian border and is basically a different world than the rest of the places we stayed in. 80+% Muslim, in some ways it’s probably more like Albania; it reminded me a lot of coastal Turkey.

Driving into Ulcing was unnerving because of construction and a detour, but also because it was much busier than Zabljak with far narrower roads than Podgorica (especially the closer we got to our apartment). In order to find our apartment, our instructions were to park at a church (literally, on the side of the road next to its wall) and wait for someone to come get us. We then followed his car through narrow, one-lane streets with walls on both sides, hoping not to encounter oncoming traffic, and arrived at a fairly large apartment, with a spectacular sea view and a balcony. 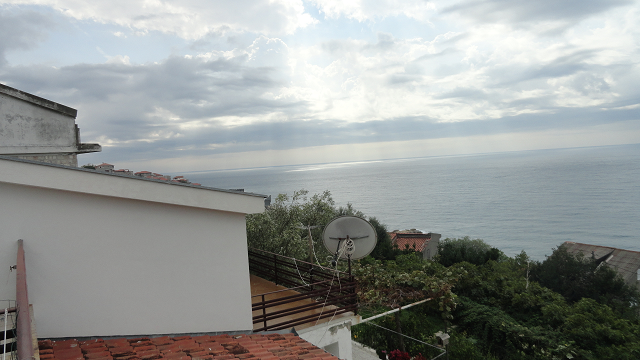 We went down to the nearest beach to find it covered in garbage. Wanting to swim, we walked to another beach and found it free of garbage, with more people and a bar. The beach was pebbles and large rocks until it was 5 feet deep or so, and then it was sand, which was kind of hilarious. Swimming in Ulcinj was, in many ways, a nicer experience than in Kotor, because it was less busy, and just felt a little more like we’d found some place mostly our own.

We walked into the old town at night, to look for a place to eat to find it kind of deserted. A few restaurants were open, but one of them had one of those pushy guys that I first encountered in Turkey. I am always disinclined to eat somewhere when some guy is harassing me to eat there.

So we eventually wandered down to the main strip in town and found our way into one of the numerous “pizzeria cafes” that dot Ulcinj. It was almost entirely full of men – drinking coffee, not alcohol – which was another sign we were in a different area of the country. I had my third fresh, whole fish of the trip and it and the other food was good, even if the vibe was more Middle East than Europe.

We walked the promenade after dinner, and then retired for the night.