This morning we went to another bakery, more expensive and not as good as the bakery of the previous morning. My tea was insanely hot so we had to wait a while, and I actually had to dilute it was some of our bottled water.

We went to the east side today and it is significantly different from the centre and west parts we had been spending all our time in. Much newer buildings, with “funkier” architecture (not my thing).

Today was a day of failed plans as much of what we had planned to do we were unable to do,  beginning with the Portuguese Synagogue, which was closed for a few days.

Not able to look at The Netherlands’ oldest (and/or largest?) synagogue, we went to the Hermitage. Once again we discovered that our museumkaart sometimes doesn’t actually include things: the Hermitage required an additional fee to enter and so we decided to pass.

So we headed to the Botanical Gardens but these were not included in the museumkaart. So we once again moved on.

Finally, we found our way to the Microbe museum known as Micropia. This was included in our card so we decided to go in. The museum is a really fascinating place, with lots of interactive exhibits and I felt like I learned way more than I could have imagined (I stopped biology after grade 10). It is highly recommended though you should attempt to go when it’s not busy, as the exhibits are all interactive and waiting in line for them would be really annoying.

For lunch we went to a “New Zealand” brunch place which was the most Toronto restaurant we went to on our entire trip, free water and all.

After lunch we wandered through the east end to our real destination, a brewery next to a windmill. This place was insanely busy, even at 2:45 on a weekday, and it was a struggle just to get our flights. (We had to do one at a time because the brewery doesn’t own a dishwasher.) The beer was not bad but it wasn’t anything extraordinary. We had one flight entirely made up of bocks and they do appear to be kind of bock-obsessed in Amsterdam, something I don’t really get.

To get back to our hotel we walked along the waterfront. 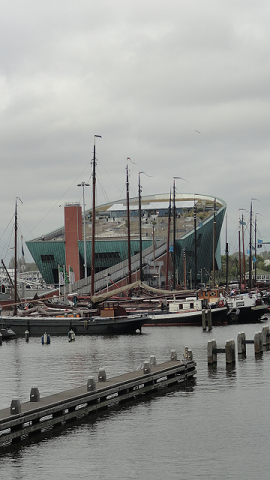 We had attempted to go to a Jenever distillery the day before but it had been super busy (and only busier when we went back later). So we tried a bar that made their own and it was basically empty. There we had a berry-flavoured one that tasted like a much better version of Cassis and another one that was essentially bourbon. I don’t really know what Jenever is exactly, but it seems like that it is far more than just “Dutch gin.”

In the evening we headed back to the Jordaan for an Indonesian rice table with a friend of Jenn’s. It was very good.

Maybe it was just me, but it seemed like Friday night in Amsterdam was significantly more debauched than the previous nights, which is saying something. I loved visiting this city and I would definitely go back. But I could without the lads, or at least so many of them.