This morning we wandered around looking for dessert places in the Red Light district until we found a dessert place that had the odd breakfast pastry. We had croissants and a Danish.

After breakfast, we headed to the Oud Kerk, the oldest building in the city. It is definitely worth going into if you have one of Amsterdam’s tourist cards.

From there, we headed to the Royal Palace, which used to be the city hall, certainly one of the most extravagant city halls of any era. The palace itself is quite old but is decorated as if it was the Napoleonic era, which is odd. Also, the free audio tour is very, very celebratory of the Dutch, to a fairly humourous extent.

We went to the Nieuw Kerk afterwards but it had an exhibition on. The museumkaart doesn’t cover exhibitions so we would have had to pay an additional (not insubstantial) fee to enter, so we looked around at the inside from the ticket line and left.

Since that was a bust, we headed over to the Canal Museum in the Jordaan. The Canal Museum is a really interesting interactive exhibit about why and how the canals were built, set in a canal house. It uses audio, visual and tactile elements to tell the story in a really unique way that involves you the visitor much more so than, say, the art galleries we had attended. It’s really worth your time. (There are cartoons!)

At some point we walked by someone moving. Moving in Amsterdam is crazy: 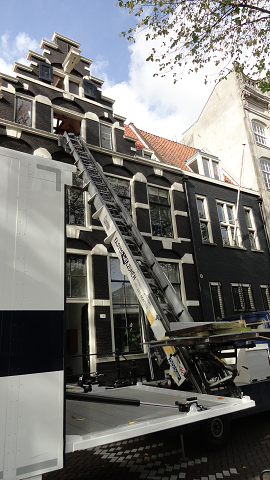 For lunch I got to have herring and then, not finding anything suitable for Jenn, we eventually had an “Amsterdam snack platter” in an Irish Pub. Ahem.

After lunch, we headed to the Stedelijk Museum, which is the contemporary art museum. It was a little bit of a bust, unless you really like De Stijl or photography. But I saw some neat stuff on the second floor from someone named Jana Euler.

On the way home, we went shopping again.

For dinner we went to a different neighbourhood and eventually settled on tapas. It was excellent.

We had walked by a bar advertising “tasting parades” (flights!) so we went there after dinner and it was basically a nano brewery. The beers were alright.

On the way home we had gelato.