Though staying at a “bed and breakfast,” breakfast was not included (this city is pricey) so we went out to find breakfast, a little groggily as our neighbours came back at 3AM (they couldn’t open their door…).

We went to the Jordaan to have some Dutch pancakes. They were large and tasty but not that far off some of the pancakes I make.

Then we went to purchase the museumkaart.  The museumkaart is expensive but it gives you access to something like a few hundred museums throughout the Netherlands over the course of a month. 40-something of these museums are in Amsterdam. So we decided to get it.

We got it at the Rijksmuseum (really an art gallery) where we decided to begin our museum tour of Amsterdam.

The Riksmuseum is gigantic and we did not see anywhere near all of it. (I’m not sure we saw half of it.) But even then, we were standing for hours looking at paintings.

So we went for a walk in De Pijt, a slightly less touristy area of the older city. We found ourselves a bar and had some craft beer. And eventually we made our way to a Surinamese/Javanese restaurant (which is confusing) and I got very confused about whether we were eating Indonesian or Surinamese cuisine. It was good, regardless. (A few meals later, Jenn’s assertion that it was Surinamese would be proved correct when we had Indonesian and it was quite different.)

After lunch we went to the Van Gogh museum, which has lots of paintings by Van Gogh, as well as some stuff by his contemporaries.

For dinner, we once again attempted to go to that “no set menu” place around the corner from our room (just past the Hudson’s Bay Company…) but it was full.

We eventually found ourselves on a tourist strip deciding between a couple apparently not very good options. We felt like we had made a huge mistake when we got our small beers and our middling appetizers. But then our entrees and desserts were really good.

After dinner we went to a microbrewery; Jenn enjoyed the beers more than I did. 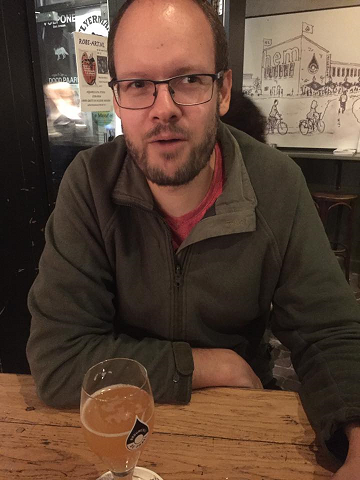