Buffet breakfast was included at our hotel, so we headed down and found that it was the most elaborate of the buffet breakfasts we would have all trip.

After breakfast, we went to the bank to get some Serbian money. We covered all our bases on this trip:

Then we dropped off some laundry because I had basically no underwear left. (I do not own enough underwear to travel for this long.) Worrying that even laudromats in The Netherlands might be horribly expensive, we decided to use the closest thing in Belgrade we could find; a full service laundry place that did all of our laundry of less than CAD$8. Just a reminder, Belgrade is cheap.

When, we headed roughly towards the old town. Even outside of the old town, there are many magnificant buildings, though not quite as many as Zagreb. 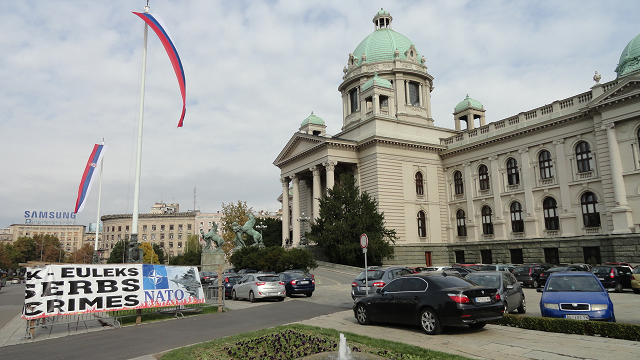 This embodies the contradictions of the world we live in: Serbia wants to join the EU but also wants (or at least endorses those who want) NATO prosecuted for war crimes. Next time someone is trying to tell you that tactical or strategic bombing will help with a sociopolitical problem, think of the Serbian parliament, trying to get Serbia into the EU, many member countries of which are in NATO, while allowing a giant banner condemning NATO outside of it. People don’t forget getting bombed.

We had a photocopy of a map, as our hotel had run out, so we wandered a little and ended up walking through the “bohemian district” on our way to the fortress.

At the fortress, we were surrounded by leaf blowers, perhaps our first reminder on the trip that it was indeed fall. (Even up in Durmitor, when it was cold, it was easy to rationalize the cold due to the height. The snow we saw on the train should have convinced us it was autumn, I know.)

So the old town is actually just a gigantic fortress. I mean, gigantic. First the Romans had one, then eventually the Slavs, then the Austrians, then the Turks. I believe when the Serbians got their independence back, it stopped being a fortress. But all of these groups either built over it or expanded it so it was quite large. It affords great views of the Danube and Belgrade. 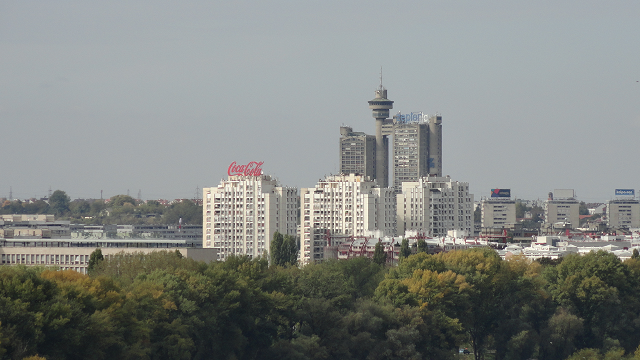 We would not make it to that part of the city, preferring to stay in the older part.

After the fortress, we wandered through the pedestrian streets of the shopping district. We found a tourist office with maps and then I could go crazy finding sites. We headed to a cathedral, only to find it was very new. We headed to a princess’ house, only to find, like every museum in Belgrade (including the museums at the fortress) it was closed on Mondays. So then we headed to look at the Hotel Moscow, because, well: 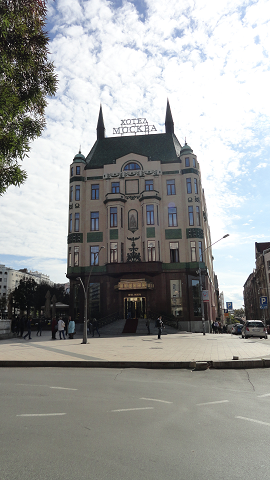 After that, we wandered by former palaces that our now used as the city hall and presidential residence respectively. Jenn was still feeling the effects of her food poisoning so we looked for something familiar and found Chinese food. As Serbian Chinese chain food goes, it was not bad.

In the afternoon, we headed to the largest church in the Balkans: 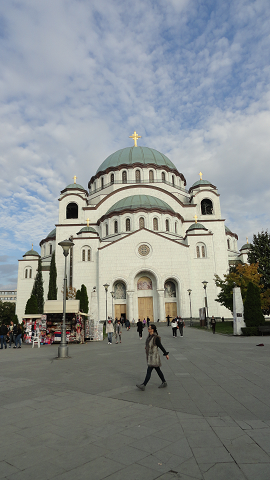 The outside was spectacular, the inside was under construction.

Subsequently, we wandered around this end of the city, looking around at various areas and angling for the Tesla Museum. The Tesla Museum was, of course, closed.

Jenn shopped a bit and then we had a beer at a place around the corner from our hotel (as we had doubled back, essentially).

The evening we ate at a restaurant dedicated to ‘Allo ‘Allo, a show I’ve never heard of but which was shockingly good for a TV-themed restaurant, and saw part of Belgrade’s Embassy Row.

Despite the fact that everything was closed, we really enjoyed the city and would recommend it as a cheap but good destination.