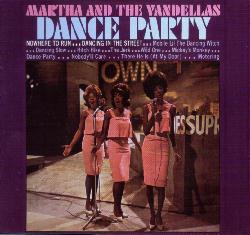 This album has the reputation as being the group’s best, but I have no idea if that’s true or not, as it’s my first experience of the group in LP form. (I know their hits from oldies radio.)

This album contains three of the group’s biggest hits – at least one of which had been released way before the album came out – but the positive reputation is also supposedly based on the relative quality of the rest of the material, including some covers of earlier Motown hits. (And, weirdly, at least one song they had released on their debut, though I cannot figure out whether or not this is a new version.) There does appear to be some truth to this – the material is catchy enough and I can certainly imagine albums that would be a little more hit  miss. (The reputation of basically every ’60s girl group is that their albums are hit-or-miss.) But the covers and, especially, the old song point to the same problem with so many of these records: a belief by the label that the dumb teenagers will buy anything.

The music is mostly quite upbeat and there are very few ballads for a Motown album (in my experience). That’s good, given the title. The arrangements are pretty dense but the group have a relatively gritty sound for the label. (This does not sound as polished as The Temptations or Miracles to my ears.)

I don’t know if it’s how I’m listening to this – on a streaming service – but the production hasn’t aged well. The vocals sound far away and the drums and percussion are mixed higher than basically anything. I understand that this happened in older recordings but I thought this was fixed by 1965. (I can think of plenty of recordings from 1965 that don’t sound like this, including recordings made in the UK, where they had fewer tracks at the time.) Maybe there’s a remaster out there somewhere I should have listened to, which would sound better. But this one does not sound particularly great.

Basically, if this is their best album I can’t say I’m super interested in listening to the other records. There are some classics here but the bad mix and suspect material don’t really endear it to me.