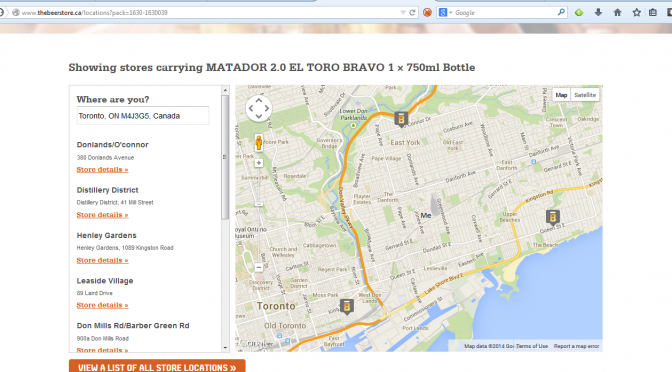 I was reading The Grid‘s “Spring Beer” guide a little while ago and noticed that Flying Monkey had put out a new version of their cedar-aged Matador. This was exciting since I tend to like a lot of the Flying Monkey special edition beers, and I found the Matador extremely interesting, if not actually stellar. So I wanted to buy it to see if it was better this year.

But to my surprise, The Grid said it was available at The Beer Store, i.e. the store owned by the three multinational macro breweries who pretend they’re Canadian, and who are notoriously down on craft beer:

I figured this had to be part of their response to the recent discussion about allowing beer into convenience stores, something that would probably kill the business. Obviously The Beer Store’s owners are opposed to this.

But I didn’t believe it so I looked it up and to my surprise, they stocked it. And the LCBO did not. (How they swung that, I don’t know.) Unfortunately, because The Beer Store is Your Source for Beer, it was barely available in my area:

But that one store at O’Connor and Donlands was walkable. I figured I’d give it a try (and also use the opportunity to tire out the dog).

When I got there I could not find it on the shelves.

So I went up to an employee and asked him if they were sold out. No, they weren’t sold out. They had never received it in the first place. I told him the website says they had stock. He basically said “Tough shit” a little more politely than that. He didn’t tell me when it was coming in, he didn’t offer to tell me if other stores had it, he didn’t seem to care that I had obviously walked there some distance – my dog was outside, I was sweating because it was hot – to find this beer, he didn’t seem interested in somehow improving my customer experience. He just looked at me as if to say “What do you want me to do about it? I just work here.”

Now, had this been the LCBO, I would have received information about the pending arrival of the beer, or information on the store closest to us that was carrying it, or both. Why do I know that? Because that is what happens when you go to the LCBO, without checking their stock online, and ask for a particular beer / wine / liquor. They care about getting you what you came for. Now, the LCBO may be a ridiculous relic of an antiquated, puritanical Ontario liquor policy, but at least they know customer service.

By stocking Matador – or at least pretending to – The Beer Store is making the weakest of gestures to try to recapture a little bit of the high-end beer customer that has long only relied on the LCBO. This gesture is pathetic, because they can’t even bother to stock the few seasonals / one-offs they claim to have available.

I was already pretty much willing to avoid purchasing beer at The Beer Store for the rest of my life if need be, and this just confirms that I should have done so.

The Beer Store continues to be the worst place for beer in the province of Ontario. Let’s finally change our liquor laws and get rid of this monstrosity.

Addendum: If you look at the above map you will notice a beer store in the Beaches. On the Beer Store website, said store is identified as the “Henley Gardens” store, on Kingston Road near Victoria Park. So not only is the inventory wrong, but so is the map.

I notified the brewery simply out of concern that a local brewery I enjoy would be getting screwed over.

The brewery responded not just with an email explaining the situation – why they were forced into the Beer Store by the LCBO’s policies – but with the beer itself! (Not just the beer, but bottle openers, coasters and stickers too. But the beer was the best part!)

This should serve as a lesson to us: we should support our local breweries. They make good, often great, beer and they care about their customers, unlike The Beer Store, the worst place to buy beer in Ontario.

Thanks again to Andrea, Lyndsay and everyone at Flying Monkeys for the beer and their excellent attitude.

Product Name
The whole store, not just one product
Price
CAD I didn't get to find out!
Product Availability
Out of Stock