This morning we took a cab ride to Monserrate, a mountain that overlooks Bogota. For the first few minutes of the cab ride, we worried he was driving us up the mountain, as we had to go up high to get on a beltway that runs along the hills.

The cabbie took us to the station where we could catch a funicular up the mountain, or a gondola. The gondola didn’t open until noon, but that was fine with us because we both wanted to take the funicular. (Jenn took pictures from it; I did not as my camera doesn’t do well through windows.)

On the top of the mountain is a church/shrine (with a walkway mimicking the stations of the cross…), some restaurants, the omnipresent vendors. 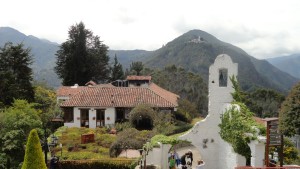 It gives you a view of the entire city. Bogota is fucking huge. Here is my failed attempt at a panorama: 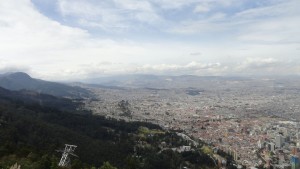 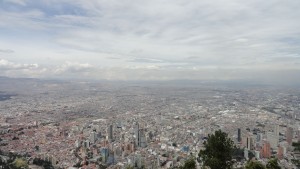 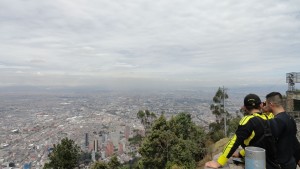 I know you really can’t tell from my pictures, but that city is endless…

The flowers and other flora up top were quite interesting – some of them looked tropical and some looked like they belong in North America. I figure that being 10,000+ feet above sea level in the tropics will do that.

After we got back down, we walked to downtown. Jenn got a coffee and I got my second “tea,” a basil/strawberry thing that was probably the best one I drank all trip. (There is very little black tea in Colombia. Most of the “tea” is fruit-based.)

Then we went to the Botero museum. Fernando Botero is a Colombian artist who began in abstract expressionism but unlike his contemporaries he renounced it once he figured out his own unique style.

The museum is full of his wonderful paintings and his sculptures, and his personal collection of modern art by numerous legendary modern painters such as Picasso. It’s an astounding collection.

Next door (and part of the same complex – free* admission by the way), as part of the Colombian National Archives (Banco de Republica), is a modern art museum featuring Botero’s contemporaries. It turns out Colombia loves (and nurtures) modern art. And it turns out the country has produced a lot of really great work. (Note: Botero is unique. The other Colombian modern artists are much closer to what you would expect from modern art: abstract expressionism, pop art, etc.)

We spent so much time in the two art galleries that we didn’t have any energy to wander around the proper museum parts of the Archives, as they looked almost as immense as the modern art gallery. As we walked out the door, an employee handed us each 200 pesos (9 cents). When I put the asterisk next to “free” that’s what I was referring to. The country pays you (albeit with very little money) for visiting the archives. What a wonderful country.

Afterwards, we wandered into the old town and went to the Iglesias Santa Clara, one of the most gaudy churches (no longer operational) that I’ve ever seen. The interior of the church is covered with portraits of saints (most anonymous), but underneath those portraits is some extremely gaudy decor. It was neat, though. Never seen anything like it. And we got to walk through a passage where the priests would sit to receive confessions.

After the church – which was across the street from the seat of government so I got searched – we went for a traditional Bogotan lunch. Then we took a cab back to our neighbourhood.

After vegging for a while, we went out for dinner and had an expensive (for Colombia! as it was actually about $30 or $35 total) and not very good meal at a bar, but we got introduced to Apostal, one of Colombia’s breweries, which actually makes interesting styles such as Black Lagers and Dubbels.