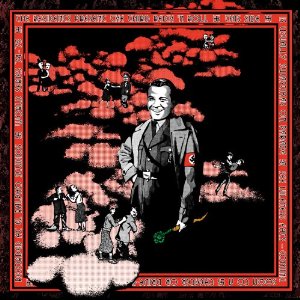 Dick Clark died the other day.

I woke up to a CTV news feature which included a CTV employee saying that Clark had “real talent” and was very nice… unlike all those other “middling talents” who weren’t so nice. If Clark had real talent, I wonder what all those musicians he showcased had? Extra-real talent?

Hundreds of thousands of people die each day. So why do we celebrate someone who was a television presenter and nothing more? Is it because he was famous, as my friend tells me? (and, to give him some credit, at least he was famous for doing something.) Or was it because he wasn’t just famous, but ubiquitously famous for many people due to his absolute constant presence on TV for the last half century? I think it’s something else.

In 1975, The Residents release their second LP, Third Reich and Roll, which featured two suites of totally brutal interpretations of ’60s pop music, in an album sleeve which featured Dick Clark as a Nazi. I wasn’t born yet, but when I saw the album cover something like 25 years later, it spoke to me.

See, in my early 20s-angry-young-manness, I had often accused Dick Clark of being a fascist.

Clark referred to himself as the “America’s oldest teenager.” His claim was backed by his, and much of the mainstream media’s, belief that he was a champion for rock and roll, and other forms of “teenager music,” throughout his life, be it on American Bandstand and New Year’s Rockin’ Eve.

But the vast majority of the music showcased on these shows had nothing to do with that most symptomatic teen expression, rebellion. On the contrary, much of the music showcased on these programs (at least after the 1960s) represented established sounds and record labels. Though numerous significant musical acts did appear at some point on American Bandstand after the 1960s, it was almost always after they made it; after they ceased being dangerous. The list of acts who performed on the show is conspicuously lacking in punk bands, to pick just one example of a genre Clark and his producers avoided due to potential controversy.

Clark was seen by the media and by parents as “America’s oldest teenager” not because he had anything to do with the actual interests of most teenagers – at least those who weren’t trying to get into Who’s Who – but rather because he represented the ideal 1950s teenager as embodied by certain Hollywood movies and (especially) certain TV shows, but which did not ever really exist in reality.

As Richard Schickel wrote about the kind of ’50s movies Blue Velvet parodied, Dick Clark and his brand of “teenager” attempted to propagate “the long-lost values of our former popular culture and attempt to [perpetuate] the ostensibly good-natured lies it used to tell in order to prop up the idea that adolescence could and should be an age of bland and twerpy innocence, instead of that clueless hell for the hormonally tormented that it actually is.”