One of the cool things about this hotel was the breakfasts. Every morning we had a choice of “American” or local breakfast, and I ate the local every day: empanadas, arepas, a local sausage and limes. Plus, fresh fruit juice! Good stuff.

This morning we walked over to Castillo de San Felipe, which I have read is one of the largest Spanish style forts in the New World, if not the largest. 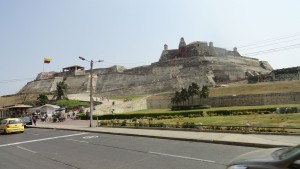 Even walking over after breakfast, it was already fucking hot. (Though, as with the entire time we were in Cartagena, there was a breeze, albeit a warm one.) Note that guides will tell you to take a cab or a bus. It’s a short walk, maybe 15 minutes maybe 20 (if you don’t walk at our speed), from the Old Town. And it’s super easy to get to.

The Castillo is immense. And it is full of all sorts of tunnels. Had I been there by myself, I probably would have spent hours wandering through the tunnels. But they were all the same and Jenn wasn’t interested, so we popped into a few, but mostly just wandered around the battlements. Fortunately, on the top, where the HQ was, there was some shade (though finding shade plus a breeze proved to be harder).

We also got a bird’s eye view of a baseball game: 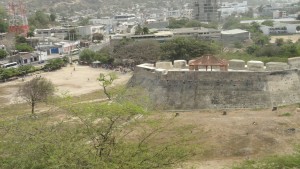 I wouldn’t have wanted to play defense.

After wandering around for a couple hours, we headed back to Cartagena. Both going and coming, we walked through Getsmani, which is the neighbourhood adjacent to the walls. It’s a mixture of Old Town style buildings and more modern architecture.

We took an A/C siesta after that because, as I said, it was fucking hot (humid and sunny).

A few hours later (give or take), we walked to the Inquisition Museum, which is located in the old headquarters (“Palace”) for the Inquisition for this region. (Cartagena was one of four locations in New Spain to have a tribunal.) On the first floor was a vaguely interesting history of the Inquisition in Colombia and the Caribbean (including a film dramatizing the story of one victim) but which was a little lost on us because only about 1/3 of the exhibits were translated into English. On the second floor, however, was the history of Cartagena itself, with paintings, artifacts and dioramas. Again, there was a language barrier, but so much was visual that it didn’t really matter. It was fascinating stuff.

After that, we went and had salads for our late lunch, as it was hot and I don’t think either of us felt particularly hungry. Then it was time for another A/C break. I know, I know, but I don’t do well in this heat.

We headed to the walls to catch a sunset, apparently one of the “musts” we actually managed to do on our trip. (We had failed to eat at the most famous restaurant in Bogota – because it was expensive – and we would eventually fail to have a drink at one of the “wall bars” that sit atop the wall.) The sunsets in Cartagena, as we learned, suck donkey balls: 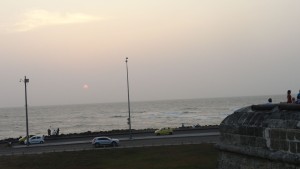 Two days in a row we would come here to see the sun set. Two days in a row it would set into the haze above the ocean as if it was the moon. I have seen more spectacular sunsets since I’ve been home (less than a week). I loved Cartagena. But don’t go for the sunsets.

We had a real struggle finding a place to eat this night. Don’t know whether it was because we were both picky or what, but we ended up walking around the entire walled city (pretty much) and eventually ate at the place we picked out as our backup plan at the very beginning. It was pizza, and it was fine. (Plus mojitos, as is the rule.)

When we got back to the room, we caught a couple episodes of American Crime Story and wondered why the Kardashian children are depicted in it.