The day before, we were hoping to figure out how to get to a beach, but we had contacted a tour group but had not heard anything. (The beach situation: beaches a few miles away in Bocagrande, on the same peninsula – rendered an “island” by a canal – but in a Miami Beach-type setting. Alternatively you can take boats to islands further afield. Cartagena’s old city does not have beaches.)

Not knowing whether or not we would be going to a beach today or tomorrow, we went to the Modern Art museum. Yes, another modern art museum. This one also had a few Boteros, and had other Colombian artists, some we had already been exposed to in Bogota, but more that we hadn’t seen yet. Again, this country loves its modern art. (There are even some sculptures outside.) The works were interesting and provocative. It was a small gallery (two storeys, five or so rooms) but full of good stuff, including some compelling stuff from Cartagena-based artists. A great experience.

Afterwards, we went down to the tour port and booked tickets for a trip to Playa Blanca on the “island” of Baru (another peninsula separated from the mainland by a canal). We were a little confused as to whether or not they knew which hotel we were at. We even went back to clarify. That would prove to be a problem tomorrow.

We spent a little while in Getsmani again. This time wandering through the public park right outside the gates to the old city, where we saw a lizard: 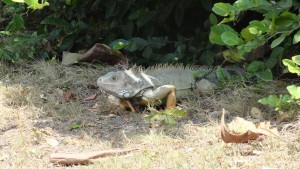 This is pretty much downtown, FYI. Busy streets on all four sides of this park, and only about 2 or 3 minutes from the gates to the old town.

We had been trying to go to La Chevicheria, which was featured on Anthony Bourdain’s No Reservations’ Colombia episode. Every previous visit we’d seen a massive line. We figured if we went for a late lunch we’d have no trouble getting in. We were 8th in line and thought we would have to wait for 30 minutes or more.

We ended up waiting only about 15-20 minutes, which was well worth it. The ceviche we had for our appetizer may have been the best ceviche either Jenn or I have ever had in our entire lives. It had a sauce I wanted to drink and, even though it was just shrimp, the flavour was just…well, had we been killed shortly thereafter, I might have been okay with it.

The mains were good – I had the “catch of the day,” just a fresh, grilled white fish, and Jenn had some delicious Italian-style calamari – very good, really, but they paled in comparison to the ceviche, which was the best thing I’ve eaten in the last calendar year, at the very least. (Okay, I’ll stop.) The excellent meal, including alcohol, came about to maybe CAD$65. It was the best meal I’ve had in months, possibly years.

If you go to Cartagena, go to La Cevicheria.

We spent the rest of the afternoon walking the walls (something you feel the need to do repeatedly when you’re here). 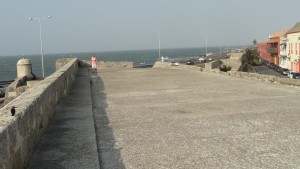 And walking through the Old City, which is among most amazing human-made places I’ve ever spent time in: 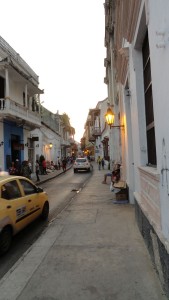 I got some more tree tomato juice (which I mentioned in an earlier post) because it’s the best. Jenn had coffee.

We went back to the hotel for beer and reading.

Because we had such a large, wonderful lunch, we just went out to get gelato. I got guava and strawberry and Jenn got pistachio and tree tomato. Maybe it was the weather, but this was some good gelato.

We went back to the “happy hour” place for beer afterwards.