I have wanted to go to Dubrovnik since I first saw a picture of it, maybe 20 years ago. It has always seemed like a place so utterly unlike the world I grew up in. I wanted to see a walled city (though I have since been to Louisburg and Cartagena), especially one situated along a glorious coast line. The city itself lived up to my expectations – even exceeded them – but there is a huge downside to traveling here, especially in our Game of Thrones world: the crowds are awful, even at the end of September.

We got up and attempted to find a bakery. Coming in by cab at night had not fully prepared us for how hilly Dubrovnik truly is (this was a very hilly trip until Amsterdam) and a bakery we thought was nearest was actually at the top of a hill. So we wandered around until we found a small grocery and bought some baked goods. As I have noted: the baked goods are great, even in places where they should be stale and/or shitty (or would be if this was Canada).

We tried to buy a bus pass figuring we would need it, but the only place that sold the pass that we could find was closed for a break. So we wandered to a cafe and had caffeine. Once done, we decided to walk further and that eventually turned into us walking all the way into town, maybe a half an hour. This was a good thing, though, because part of the walk was along the coast.

If you stay a ways from the old town but are still in walking distance, I would highly recommend walking in along the water.

We got to the entrance to the old city to find it swarming with tourists and tours as if we were at Disney World or something. (Remember, it’s almost October.) Just entering through the gate was a task in and of itself, requiring us to weave and dodge through slow-moving tour groups, and to get in a long line of people. We spilled out into a square that was basically equally crowded. Not knowing what to do, we decided to go on the walls.

Zagreb did not prepare us for Dubrovnik: because Dubrovnik is so popular, everything is priced as if you are in western Europe or North America; it is an expensive place.

The nice thing about the old city is that it is built on a valley between two hills. The moment – literally, the moment – you start climbing stares, the crowds disappear. (At least in autumn.) So if you come here and you want to avoid the crowds, just dart into one of the alleys going up hill, and you’ll avoid them.

We walked around the entirety of the old city, through various alleys, and saw the odd church (though the ones in the valley were hard to get into). We decided to get lunch outside the city walls, as we didn’t want to pay the tourist prices.

I must say that Dubrovnik is everything you think it is (and have seen on Game of Thrones); though the crowds are off-putting, I have never seen another place like it and have trouble imagining another one exists. It’s not just the cobblestone streets and alleys – it’s the winding passages and hills and the sheer immensity of it. Cartagena’s walled city was a much more pleasant (and affordable) experience, but Dubrovnik is more impressive.

We pushed through the crowds out through the gate and walked up a hill. We found a place to get smoothies and, though they were pricey for Croatia (this is still Dubrovnik), they were tasty and also very at odds with our diet for the rest of the trip.

We then found a sandwich place with reasonably good sandwiches at ridiculous prices (cheaper than Zagreb) and contented ourself with not getting ripped off.

We decided that, of our two options, the city walls were the better one: we’d get a view of the old city from the top of the walls that wouldn’t be that much less spectacular than the gondola. This was absolutely the right decision, we’d find out, as our bus the next day would take us up high over the city to give us basically the same view as from the gondola (albeit a few hundred metres lower) and the walls were way, way more valuable than that view.

By this time, the crowds had abated somewhat and we thought that maybe some of the cruise ship tours had returned to their boats.

I took more pictures of the city walls than I have of just about anything in the last decade of my life. I have deleted the worst ones already and am still left with 30 or more pictures. The city walls (and the view from them) are one of those things it’s hard to get over, so you just take picture after picture after picture, moving a few feet and then taking some more. They are the highlight of travelling to Dubrovnik, in my mind, providing spectacular views of both the city and the sea. If you go up when they’re not as crowded, you can take your time; I believe we were up there for 90 minutes or so.

I have never seen anything like this in my life.

One of the interesting things about living in places like this is you have to adapt modern life to old buildings. So there are not one but two outdoor athletic facilities built along the walls. 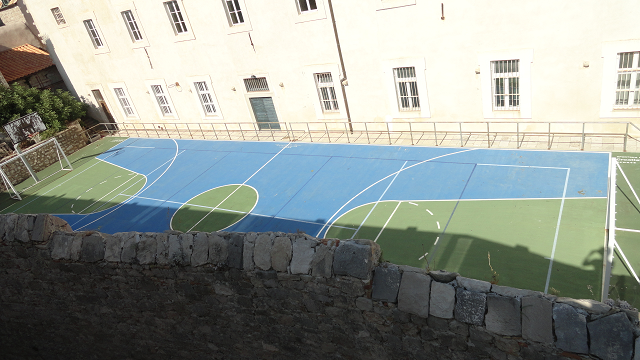 This appears to be a rather all-purpose court; the other one I saw appeared to be strictly basketball. (Croatia loves its basketball.)

Coming to Dubrovnik should be on everyone’s bucket list. But the challenge is to come when it isn’t that swarming in tourists and the weather it decent. I don’t know when that is, but it’s later than when we went (or earlier than the equivalent time in the spring). I’m not sure I can put into words how impressive Dubrovnik is. It would have been so much more enjoyable without the crowds. (Related: I loved Ephesus but I went there in February when there were relatively few tours. I know other people who have gone during summer and could barely handle the crowds. These spectacular and famous old places need to be visited at the right time to be enjoyed fully.)

Once done with the experience of walking the walls – one of the highlights of my entire travelling life – we headed down to a craft beer store we found earlier in the day. We lucked out, as the one and only employee was just about to go on her break. We bought some (over-priced) Croatian (and possibly Serbian) craft beer as fast as we could so she could go on her break. Yes, it was pricey, but this would be the only craft-beer-dedicated store we would see until Amsterdam.

We took the bus back to our apartment because we had been walking (and climbing shoddy stairs) for the entire day. The bus was insanely quick, perhaps because we left a little earlier than we would have had we also done the gondola.

We rested at the hotel for a while (it was a hot day to boot) – I got a glimpse of the 1975 version of The Count of Monte Cristo – and then I figured out where we could watch the sunset.

Because it’s Dubrovnik, we had to clamber over a hill to get there. Because the tourist maps don’t have contour lines, we needlessly walked up to the top of one of the smaller hills in order to get over it, instead of going around it. We soon found our way to a pedestrian street which and another world of resorts and restaurants, as if we were in Florida. We are both very happy we didn’t stay in that area.

We sat on the beach and watched the sunset.

As sunsets in walled cities go, this was much better than Cartagena. (Don’t go to Cartagena for the sunsets, they are bad.)

Later, we discovered the beach is known as “sunset beach” because it faces directly west and is, well, a beach. (There aren’t that many beaches long the Adriatic, due to its craggy coastline.)

After sunset, we wandered around the pedestrian street, generally appalled at the prices (having been spoiled by Zagreb). Eventually, we saw a sign for a pizza place off the main drag and decided it would be a more affordable option. It was.

It was also really, really good, with a borderline-Libretto quality pizza. (That may be a slight exaggeration, but it was very good.)

When we got back to the hotel room, we found a show called Walking the Himalayas, which I hope is available in Canada.