We got up at 5AM because of an early flight. We did our usual thing, and took the TTC to Dundas West, and took the UP train to Pearson. If you don’t take this train yet, it’s the best way to get to the airport if you live in downtown. It’s so much faster than the TTC and it’s way, way cheaper than a cab. The security line was perhaps the worst I’ve ever been in at Pearson, so it was a good thing we went as early as we could.

We flew Air Canada Rouge, which doesn’t have the usual audio visual entertainment, so I ended up reading a lot on the way down and the way back. (They have tablets you can “rent” and they have an app.) So that’s why I finished Sophie’s Choice at long last. I actually managed to sleep on the flight a teeny bit too, which is weird for me.

We got into Mexico City sometime after noon. The international arrivals and departures are at the west end of the airport and the subway is at the east end of the airport. We had resolved to take the subway, because we had heard that it’s accessible, cheap and safe. It’s actually really easy to get to, as it’s basically a 90 second walk from the airport, so walking through the airport actually takes longer than getting to the subway.

The Mexico City subway is a rather incredible thing. It is dirt cheap, approximately 30 cents Canadian per trip. Jenn estimates that we spent less than $10 total for us to use the subway for our entire trip. It is also busy, supposedly the second most crowded system on the planet, after Tokyo. We did not experience that crowd save one trip, which I’ll talk about in a later post.

The other interesting thing about the system, from my point of view, is how visually similar it is to Montreal’s. I can’t begin to tell you the deja vu I got walking into the system the first day. The older stations – the ones which haven’t been renovated – look similar to the Montreal stations, the turnstiles look and function similar to the Montreal turnstiles, and the trains are very, very similar in both function and look – they are both “rubber tire” trains. I didn’t find anything that suggests they were built by the same companies, but it sure seems like it.

The system is fast and efficient when it works and when you use it in off-hours. There are delays, just like any system, but there are rarely explanations. (We wouldn’t have understood those announcements, but I think I heard two total during all the stoppages.) But if you get on it at the right time, you can be across the city in no time. It is the only way to get around, as far as I’m concerned. (Also, I never once put my backpack on the front and we never got robbed. The threat of theft on the Mexico City subway seems exaggerated.)

We knew we would be early for check-in at our Air B&B in the Condesa (or the Roma, depending upon where you draw the line) but Jenn texted ahead and we ended up actually being (slightly) late. Our apartment was on the third floor of a 3-storey building. The apartment was relatively recently renovated and immaculate. It had basically every amenity you could want – including something that would come in quite handy a few days later – and there were really thoughtful touches that made it seem much more like you were staying in someone’s home. It was ideal for our stay in every way except for one thing: the noise. The floorboards creaked – some more than others – and the bed did too; to a ridiculously degree in fact so that when one of us turned over, the thing made a loud noise. The neighbours downstairs must be crazy from that bed. (Also, they were noisy, but that could be the construction of the building, rather than anything they were doing.) But a great location and, mostly, a really great place to stay.

It was mid afternoon Mexico City time by the time we settled, so we went out to find some food. We ate at the second Mexican food place we found – the first had a line – and discovered something we didn’t think possible: Mexico City is cheaper than Colombia. Sure, not everywhere, and probably this perception is based partly on staying in really rich areas in Bogota and Medellin, but Mexico City is dirt cheap. If you exclude the F1 race and paying for better seats on our flights, this may have been the cheapest vacation (money spent per day) I’ve taken in my adult life. It was so cheap, paying for more legroom ended up partially working into my predicted expenses (i.e. I used money leftover for the legroom). It’s so cheap that we got used to it, and eventually we got annoyed when we went somewhere slightly closer to in line with prices in Canada (not really close at all).

So: we at at this “high end” taco place. the tacos were between CAD$2.50 and $4 – though I don’t think we ordered any that expensive – but were substantially bigger (and different) than the traditional tacos we’d have later. Jenn ordered a soup which was a couple of bucks. Our beers were maybe $3 each. This was an expensive restaurant. The meal was just over $20 with tip.

After lunch, we began to walk around the Roma, the neighbourhood we were staying on the edge of. It’s a somewhat high end neighbourhood with lots of fascinating buildings (old and new) and lots of restaurants and bars.

We found our way up to the main drag (under which the subway runs) and decided to head for the Bosque de Chapultepec, a Central Park-like urban park (nearly 1,700 acres) within a very short walk (but across a ring road) from our place. 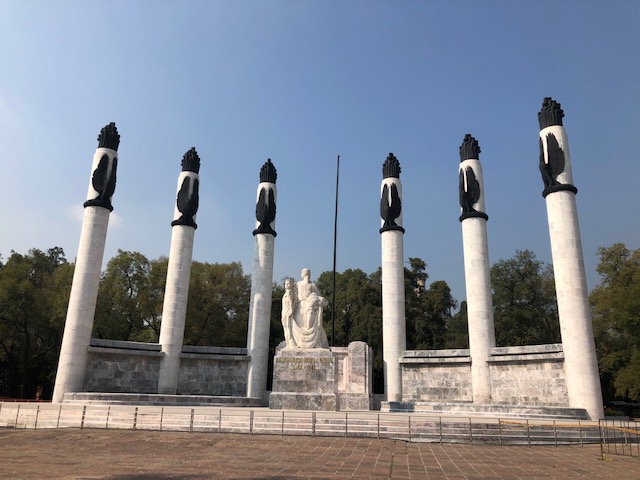 There’s this memorial, there’s a “castle” (more of a fortified manor house), some ponds, and lots of walkways with vendors on them. We spent a while in the park, including sitting by the largest pond/lake trying to decide how much energy we had for the rest of the day. Eventually we decided we would walk some more but would save any museums for tomorrow.

We walked down through part of Condesa and back over to Roma. We stopped for a beer at a place we thought would maybe have some craft beer, they didn’t but we had a beer anyway. (We discovered that Bogota is far further ahead in the craft beer revolution, at least in terms of how widespread it is, than Mexico City, or at least the neighbourhoods we were in.) Then we walked to the Parque de Mexico, a smaller but very nice park we’d wonder into a few more times over the next few days, due to its proximity to our place.

Eventually we walked to a nice old church further east. At that point, we were both pretty damn tired so we went home.

We were pretty exhausted so making a decision about dinner became complicated. Eventually we ate gigantic tortas from a cart in our neighbourhood. They were slightly more than $3 each.