This morning we woke up and ate our Riding Mountain National Park cinnamon buns. They were quite good but not as good as the ones from Saskatoon. Today we were supposed to go for a boat ride. So we got in the car and headed back to Manitoba to Lake of the Prairies.

Lake of the Prairies is actually a reservoir made by the dammed Assiniboine River, with the intention of reducing flooding downstream in Winnipeg, very far away (but on the same river system).

However, when we got to the boat launch, we learned that Jenn’s uncle’s boat’s batteries were dead. So we helped him put the boat away and then headed back to Roblin, Manitoba for lunch. Twice in Roblin, Manitoba in two days was not something we were expecting.

Lunch was humble country diner food but was quite tasty. I had a salad because I needed one.

After lunch we headed down to the southern end of the lake/reservoir. On the way, we visited a grain elevator historic site in Inglis. 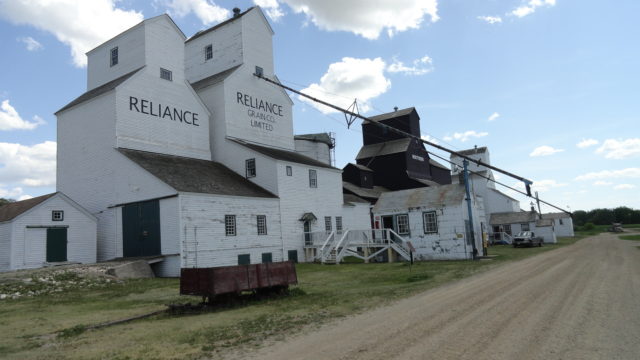 I have seen grain elevators from far away, and I’ve seen the odd new one, but I’m not sure I’ve ever seen any this old and restored this well.

We then headed to Assessippi Provincial Park to go swimming…yes, again. However, we had an interesting time getting there as the main road is currently closed due to a mudslide or something. So we had to take the service road into the park, which is long and winding and steep.

Once finally in the park, we went to the beach, which was not open yet for the season. But, since there wasn’t anything or anyone to stop us, we went in anyway.

Lake of the Prairies was much, much warmer than Clear Lake. I can’t imagine how warm it will be in August or September. I don’t know if this is normal, but it really seems like a warm lake. I guess it is shallow (on account it being a dammed river).

Once we finished swimming, Jenn’s father tried to convince us to drive to Swan River, Manitoba. It was already mid-afternoon and we’d been out of the house since 10. We decided we’d rather go back to the farm.

I fell asleep in the car on the way back to the farm, which suggests I am getting old enough to nap in the car. Also, cold water is relaxing.

In Yorkton, we found this:

We went back to the farm for a bit and then headed back to Yorkton to go to a generic pub type restaurant where I had surprisingly tasty (but unsurprisingly inauthentic) shrimp tacos.

After dinner we went to the casino and I lost $40.