I was super happy this morning, because I slept in! And not such a ridiculous amount that it would affect my future nights, but seemingly enough that I adjusted to European time in one night. I felt rested and ready to go after barely being able to stay awake during dinner the night before. Off to a good start.

I turned on the TV while Jenn was getting ready to see something she described as “the most Eastern European thing ever”: a monk – an active monk, as far as I could tell – singing what was essentially a mid-tempo power ballad to an audience that knew all the words. It was mystifying. I still don’t know what to think about it.

We went to a cafe for breakfast and discovered something that we would have to learn over and over again: cafes often don’t have food (or have very little). We had our caffeine and headed across the street to the cafe we had lunch at the day before, to get more bureks.

We then walked downtown to catch the bus to Šestine, a village partway up the side of the mountain that Zagreb sits on. We went here so that we could get a head start on our walk up this hill. In the village, we had more caffeine and then began our long walk up the mountain.

It was a good temperature for a hike. We missed the hiking trail and had to walk on the road but that turns out that it was the easier route. It was weird, as it was a one-way road down the mountain.

Zagreb’s castle, Medvedgrad, is much of the way up the mountain. That’s a good thing as it affords you spectacular views of the city: 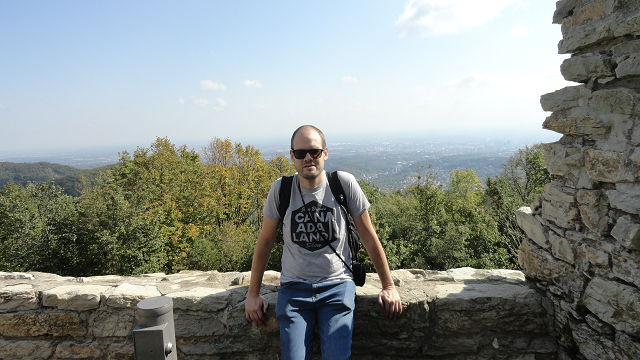 The castle is a ruin but has been partially restored so there is stuff to see. There’s also a memorial to fallen soldiers. However, the real reason is to come here is the view.

We had walked past a restaurant on the way up and decided to eat there. There we were, two sweaty Canadians (taking the table of three sweaty Canadians who had eaten there before us) eating at this fancy restaurant where rich Croatian men appeared to take their wives/mistresses or business associates. The food was excellent, and the view was better.

We walked the rest of the way down to the village and caught the bus back to the city.

Having walked all the way back to our hotel, we took the tram in for drink later on. We went to a craft beer bar and – get this – they had Sawdust City on tap! Lone Pine in Zagreb? Really? Also, they had bottles from Dunham, Les Trois Mosquestaires and Flying Monkey. I was stupefied. Anyway, I avoided the Canadian beers and tried various local beers, one or two of which were quite decent.

After the drink, we ate some Croatian hot dogs (two to a bun) which were quite tasty.