On the redeye to Croatia, I watched the new King Arthur. The flight was shorter than it was supposed to be, but we didn’t sleep very well. We got to Zagreb around 11AM local time.

Entering the EU through Croatia reminded me of Turkey: no interview by the officer, just a visa stamp and off we went.

There’s a pretty affordable shuttle from the airport to the bus terminal. The ride in was not inspiring as we saw numerous relics of communism. On the drive in from the airport, Zagreb appears to be an incredibly ugly city.

We booked a hotel right near the bus station, which felt rather brilliant when we were groggily trudging over to the hotel post-redeye. However, the hotel was not in downtown, which may have proved a problem were Zagreb not highly walkable.

We were able to check in early, which was great, and wandered over to a cafe (turned out to be a chain) where we were introduced to two themes that would dominate the trip:

The hotel was pretty bare bones (especially compared to some of the places we stayed later on) but met our needs.

After lunch and an attempt at a “rest” in the hotel room where I could barely keep from passing out for hours (on account of the jet lag). We soon left the hotel once we recognized the dangers of us sleeping the afternoon away.

We promptly headed downtown, into the old town which is nothing like the horrible building off the highway. We found our way to Zagreb’s cathedral; the biggest in the Balkans and one of the nicest cathedrals I’ve ever seen.

The outside does not in any way prepare you for the incredible inside, with the exception of the detail work over the main entrance. Just an incredible building and probably the most incredible religious building we were able to enter on this trip.

We then wandered around the old town, found a bar street (with craft beer bars! more on that later) and climbed up to the upper town, where we found another unique church, with a really weird roof (albeit a much newer vintage). We also walked through a church literally in a street, something I have never seen before.

Then we climbed up a tower that The Booze Traveller had climbed upon on his Croatian episode, and looked out at the city. 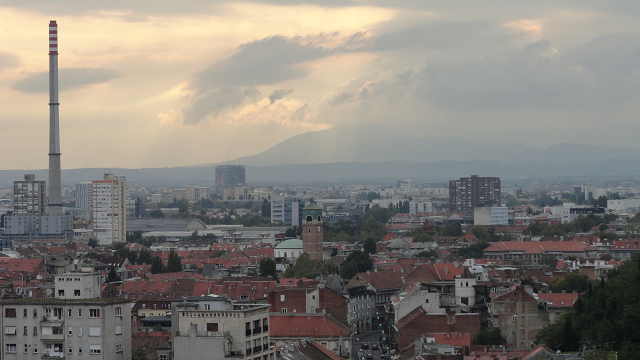 We wandered back to the lower half of the old town and had a beer in a square – my first “beer in a square” experience and one I will remember for some time, even though the bar itself was nothing special. (Though I did have my first Tomislav.)

We headed back to the hotel neighbourhood for dinner, only to find that just about everything was closed. We ended up having Lebanese food, the second time we’ve traveled to another continent and managed to eat Lebanese food the first night. (Also, the second time I could barely keep my eyes open during dinner. At one point, I did actually briefly fall asleep, though not into my food, fortunately.)

We got a fair amount done given that we showed up on a red-eye. My initial impression of Zagreb from the shuttle turned out to be completely wrong: it’s a beautiful city downtown, with some really incredible buildings.